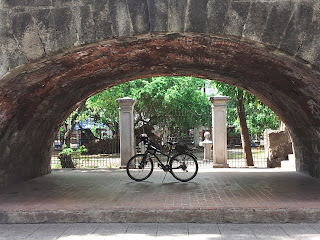 Yes, it was the Pacquiao-Mayweather fight, but I felt compelled to take my bicycle out for a ride since I haven't been on the saddle for more than a week.

Besides, I was bound to find a place on the road that would show the fight on a big screen somewhere.

So, I left the house and pedaled my way towards Manila, and I had no pre-planned route in mind. I told myself that I would figure it all out when I arrive at the capital city.

I also had my handlebar-mounted action camera with me, and I took a lot of footage the entire ride.

Unfortunately, for some strange reason I still can't explain, none of the videos were saved. The only record of my ride was the series of pictures and short videos taken from my phone.

And this was my roundabout route around Manila on my GPS app.


Got the chance to watch the fight when I passed by Malacanang Palace complex at St. Jude's church that set up a big screen TV inside their courtyard. By the time the fight started, the courtyard and the street was full of people witnessing Manny Pacquiao's heart-breaking loss.

CHECK OUT THE PICTURES HERE.