A 48 kilometer kind of work day

So, I had to go on a work-related errand this morning. I decided to bike to my destination since I was 99% certain that I would get there faster rather than taking the cab. Turns out I was right. Traffic was slow going to virtual stand still.

I enjoyed the ride so much, I made a wrong turn somewhere so I had to back track. I eventually arrived at McKinley Hills where I had to file some paper work.

I got the job done, biked my way back to our office, and around 2 hours later, I headed out again on yet another errand, this time at Quezon City Hall. But, I took a cab this time. 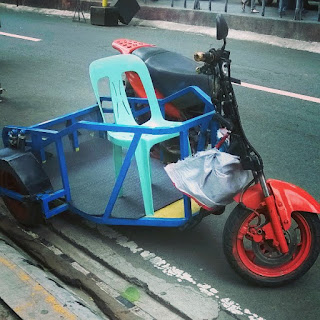 While I was there, I saw this guy on a wierd-looking motorbike pass by. When he got off the trike, I saw him grab crutches and limped his way towards a building. The guy suffered from polio. 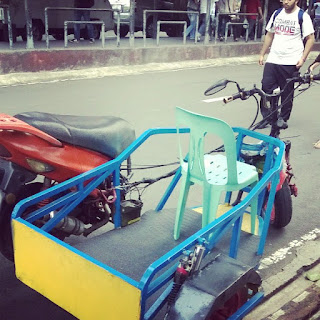 Anyway, it looks like he took a motorcycle, chopped it in half, rammed a sidecar into the innards of the rear half of the bike, and jammed the front half of the motorbike including the handlebars onto the sidecar. To top it all off, he decided to throw a plastic chair into this monstrosity.

LOL. I was impressed.